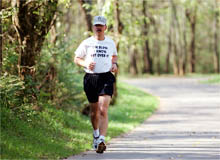 He's been called the Pied Piper of the second running boom–and for good reason. Since his column, "The Chronicles," started in Runner's World magazine in 1996, John "The Penguin" Bingham has become one of the running community's most popular and recognized personalities.

Through his books and his RW column, now published in every English edition of RW, Bingham has inspired a generation of new runners to find joy in walking, running, and racing.  His transformation from a life of "sedentary confinement" to marathoner has become a model for people of all ages and abilities. Once an overweight couch potato, he looked mid-life in the face–and got moving.  Since then, he has participated in over 25 marathons and hundreds of 5K and 10K races.

Bingham says, "Through running, I create myself as I have always wanted to be. Nothing in my experience was as powerful as crossing the finish line of my first race. With that single step, I overcame a lifetime of unkept promises to myself."   In a self-effacing and humorous manner, Bingham delivers his message of hope and inspiration to people who've been running for a week or a lifetime. His message has universal appeal–to elite runners at the Boston Marathon and  members of local running and walking clubs alike.

In true cross-country fashion, Bingham criss-crossed the country for the fifth summer this year, leading marathon pace groups, speaking to packed rooms of runners of all levels, and guiding an ever-growing number of fans on his Internet virtual training groups–the Courage to Start, the Penguin Brigade, and Team Penguin.  The touring is necessary, he believes, to keep in touch with the hearts and Ôsoles' of the second running boomers whose advocate he's become.

In the summer of 1997, John toured 23 states in 56 days on his motorcycle. In 1998, he logged 20 cities in 20 weeks during his "Traveling at the Speed of Life" tour. He and his 27-year-old son launched the 1999 Penguin Tour with an 11-day cross-country motorcycle ride, after which they ran the Rock N Roll marathon together. 2000 found him on the road for months on his Millenium tour and in 2001 he covered 11,000 miles during the Penguin Odyssey tour.

Bingham is the honorary race director of Elite Racing's Country Music Marathon in Nashville, TN, and a founder of the Virginia Beach Rock N Roll Half Marathon. In the last 5 years, he has been a featured speaker and clinician at the Austin, Boston, Chicago, Columbus, Country Music, Dallas/White Rock, Disney, Flying Pig, Honolulu, Houston, Mayor's Midnight Sun, Myrtle Beach, Portland, Rock N Roll, San Diego, San Francisco, and Vermont City marathons. He's led over 15 Runner's World marathon pace groups in the U.S and has been the only U.S. member of the Runner's World UK pacing team at the 1998-2002 London marathons. He has organized pace groups for the 1999 Houston Marathon, 2000 Myrtle Beach Marathon and Elite Racing's Country Music and Rock N Roll marathons.

In June 1998, Breakaway Books published Bingham's book The Penguin Brigade Training Log–a "Penguin" family photo album, training logbook, and motivational guide for new and longtime runners.  His first major book, The Courage to Start: A Guide to Running for Your Life, has been among the top 10 running books since it's publication (Simon & Schuster, April 1999.) In April 2002, Bingham's new book No Need for Speed: A Beginner's Guide to the Joy of Running will be published by Rodale Press.

Amby Burfoot, Editor of Runner's World, says of Bingham: "People can so identify with John and his struggles and with his attempts to be faster than he is.  John shows them that it's okay for runners to admit their inadequacies."

John can be reached via email at [email protected]